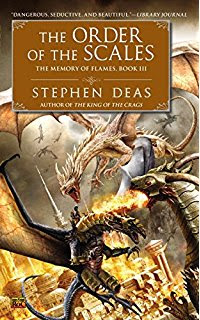 I know lots of stories are compared to Game of Thrones these days because of its popularity, but this series truely resembles George Martin's fantasy soap opera.

The Memory of the Flames series by Stephen Deas follows a multitude of characters ranging across political groups and social class in a empire ruled by a Speaker overseeing Dragon Kings and Queens. These are people who have power because of the number of dragons that they own and dragon riders that follow them.

The dragons, however, are not the mere beasts that they appear. They are, in fact, kept in submission by a potion fed to them by the alchemists to keep them from "awakening." When one dragon is lost in an apparent attempt to steal her, she no longer receives this drug and begins to remember her past lives (when they die, dragons re-enter an egg and hatch again, so there is always the same number). She resolves to free her kindred and wipe out humanity ("Little Ones" / food).

Everyone You Love Is Dead

Unfortunately, this story most resembles Game of Thrones in the execution of this plot. Most of the story is devoted to the nobility's petty squabbles over power: trading favors, betraying each other, sexual relationships, marriage for political gain, killing rivals, etc.

Because the characters don't just die tragically, giving me lots of "feels", but they are all bad people, and I cannot consider it a great loss when they leave the story. In fact, there is almost always some satisfaction that their particular agenda did not work out. The most difficult part is in choosing who to root for now that they, too, are dead.

In the end, all the characters are striving in vain. Their goals and desires are snuffed out with their lives, leaving me to wonder why Deas bothered to introduce them at all.

There are lots of characters who aspire to be better people, but they repeatedly fail and then die. What is the message here?

The world has a religion, but no one believes. Those who do - who allow it to give them purpose - are fanatics and crazies who become blinded to their own insignificance. They, too, die without accomplishing their goals or moving the story forward in any way.

As I read, I couldn't escape the looming feeling that I was investing my time and emotions pointlessly because every character's ambitions and conflicts were about to be swept away by a larger external conflict - if they survived to see it. The individual story lines never appeared to be building towards a singular climax.

By the end of book three, I seriously doubted there would be a climax at all.

Quit While You're Ahead

Maybe I will seek out the fourth book. Not, clearly, for any entertainment value, but purely out of a desire for closure. Unfortunately, that isn't the last book either, so there probably isn't any to be had. I wouldn't recommend this series, but then I did not enjoy Game of Thrones either.
Reactions:
Labels: court intrigue fantasy dragons fantasy drama