Beauty: A Brief Review of an Ugly Sleeping Beauty Tale 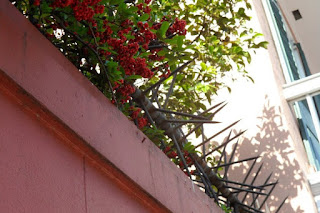 Sarah Pinborough's book Beauty: A Wicked Sleeping Beauty Tale follows a prince, a huntsman, and Red Riding Hood as they enter sleeping beauty's kingdom and awaken her. What they didn't know is that Beauty has a split personality: she is also the Beast (a crazy witch who enjoys drinking blood, torturing people, and general debauchery).

Overall, the story is stark and unimaginative. I mentioned in my review of Cinderella that there are many really good retellings of classic fairy tales, but this isn't one of them. It is as if Pinborough took the bones of half-a-dozen or so fairy tales and cast them on the ground to see how they crossed when they landed. Rumpelstiltskin pricks Beauty with the spindle, and his daughter Rapunzel is Red Riding Hood's grandmother. Red Riding Hood falls in love with the wolf, and the huntsman finds a pair of glass slippers. The whole story is a re-smashing of tales that already existed, with nothing of grace or originality to set it apart.

Pinborough includes no fewer than three sex scenes in a book a mere 178 pages long. An attempt to preach against sexist double-standards seems to exist, but it is bogged down and muddled by the clumsy attempts at titillation.

First, the Huntsman engages in a one night stand, giving the reader a bit of a lecture about the follies of double-standards regarding virginity. He thinks to himself, "They were all just animals, after all, and why should a woman deny herself pleasure simply because an insecure man might think less of her?" (75). Pinborough seems to argue that women shouldn't be expected to "deny" themselves if men are not, and men are not, so everyone should enjoy each other! There are three problems with this argument. First, it assumes that a woman remains a virgin because of the male expectations imposed upon her and not for any motivation of her own, thereby stripping women of sexual agency through abstinence. Second, it assumes that a virgin groom does not exist and that, as such, women have no opinion regarding the past sexual encounters of the men they marry. Lastly, the argument denies any consequences of engaging in willy-nilly sexual activities. There are no consequences; people are just animals; and anyone with objections is "insecure."

Nevertheless, I would have more respect for the argument if it was upheld by the rest of the characters. Later, Red Riding Hood has sex with a werewolf. Of interest to note: the context from her point of view is sex in a loving, long term relationship and not a one night stand. While she certainly can't be argued to be denying herself, she is experiencing the moment in the assumption of exclusivity. Both of these sexual events are described with just enough detail to be arousing and were not completely unexpected to me, so I shrugged them off, glanced over them, and got back to the meat of the plot.

Although both of these encounters could have been written by a twelve-year-old, what really drove the story into immaturity was the prince's experience with the Beast. When Beauty changes into the Beast, the first minister tries to keep the prince in his room. The prince suspects that something is being hidden from him, so he leaves the room and explores the castle. He finds a ballroom full of young people doing it. There are three-some and lesbian acts (no gay equivalents = a sexist objectification of women). Five paragraphs describe the events of this ball as nothing else is described in the whole of the book. However, it cannot be argued that they were described any better. Not much is truly required of either imagination or experience to write about sex and deviant sexual acts. It just takes an immature fascination.

The prince is welcomed by the Beast. He feels attracted to her and wants to have sex with her (some spell is at work), but she tells him they can't have sex until their wedding night. That's ok, though, because he can still enjoy the ball with the two women she pushes him towards. What are the standards here? We are all animals and should have sex with whomever we want, one night stand or long term relationship, but not with someone we plan to marry until we're married? How is the preserving of Beauty's purity in this situation not a double-standard?

The term "wicked" has several connotations. Perhaps my east-coast heritage brings phrases like "wicked-good" to mind first, but one cannot help but think of the book Wicked by Gregory Maguire when it comes to a re-writing of a classic children's tale for adults. Unfortunately, the reader is treated to none of the complexities in which that tale relishes in Beauty: A Wicked Sleeping Beauty Tale. Instead, by the word "wicked," Pinborough seems to mean crude, immature, and even disgusting. I cannot honestly say the book was "otherwise fantastic." A story isn't "dark" because it contains sex. A story is dark when elements like sexual sin, rape, violence, drugs, or death are confronted by the characters. Instead, after their brush with the Beast, the main characters put her back to sleep and escape. A conflict between light and dark is introduced and abandoned, solving nothing. But at least everyone got laid.
Reactions:
Labels: fairy tale fantasy