From My Bookshelf: Inkheart 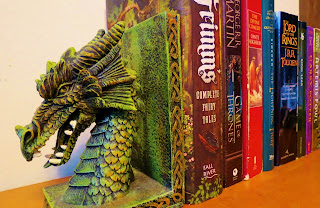 Inkheart by Cornelia Funke was a favorite of mine when I was younger, and recently I snatched up a nice copy at a local secondhand store. In my opinion, it is one of the better Juvenile Fiction books. Funke is a wonderful author--I really must get myself a copy in the original German, but I feel that the translator Anthea Bell does a great job.

The main character is a twelve-year-old girl named Meggie, who's father Mo is such a good reader that when he reads aloud he pulls characters out of their stories. Unfortunately, these characters swap places with someone from our world, and Meggie's mother was "read into" the book Inkheart, while several unsavory characters were "read out" of it. The central conflict is between Meggie's family and  Capricorn, the leader of these characters. He attempts to force Mo to read other things out of books like gold and one of his killing tools "the Shadow." Along the way, Meggie and Mo solicit help from her great aunt Elinor (a book collector/horder), a boy named Farid (a character read out of Tales From the Thousand and One Nights), Dustfinger (a character read out of Inkheart), and Fenoglio (Inkheart's author). Obviously, the language tends to drift into the meta from time-to-time.

Funke does an excellent job of capturing the mystical draw of the written word. Meggie's world is full of the wonder of stories. Inkheart does not simply tap into the emotions of book-sympathizers. It is also a very enjoyable tale.
Any book-lover will be jealous of her home where "stacks of books were piled high all over the house--not just arranged in neat rows on bookshelves" and positively green over Elinor's house where every wall--except in the kitchen--is lined with floor to ceiling bookshelves (Funke 4).

During this particular reading, however, three thoughts rose to my mind.

1. Who Is the Hero of Inkheart?

Obviously, Meggie is the main character of the book that sits on my shelf, but the book called "Inkheart" (identified hereafter with quotes instead of italics) within the story must also have a hero? We know that in the world of "Inkheart" there are many dangers as well as beautiful things. We know that Capricorn and his men are antagonists. Basta and the Shadow are antagonists. Dustfinger is morally ambiguous, so not a hero--plus we discover that he dies in the story before the end. We also discover through Fenoglio that Capricorn does not die at the end of the story, but escapes to appear in the sequel he was contemplating at the time. The plot of "Inkheart" remains unknown to us, but surely there is someone who rises to be a hero? Fenoglio named the book to reflect Capricorn's black heart, so perhaps he is intended to be a sort of anti-hero?

I only wonder this because it seems to me that when you want to defeat the bad guys, the good guy who defeats them in the story might be a good place to start.

2. What Is Happening to the Story?

We are encouraged to think of the stories as other worlds. Mo explains that the stories don't change after the characters have been read out of them and theorizes that perhaps these are only shadows of the real characters who remain within the book. This presents some problems such as can more than one Capricorn be read out of the story? And what about Meggie's mother who was read into the story? She didn't leave a shadow. At the end Meggie's mother explains that the people in "Inkheart" only spoke of Capricorn "as if he had gone away for a while" (Funke 529). But wouldn't that change the story? I finally concluded that such an explanation only works for a story without a plot or for characters like Farid who were only mentioned briefly in their own stories.

3. A Knife to My Child's Throat

By the climax, I was very tired of intimidation. Capricorn built his empire on it, apparently. If Mo refused to read Capricorn's Shadow out of the book, he would threaten Meggie. If Mo escaped, they held Meggie as bait. If he didn't come for her, it is assumed that they would hurt her or even kill her.

By the end of the story this scenerio had played out so many times that I wished someone would refuse to be intimidated by the threats. Kill my family? Fine, but I won't help you do the same or worse to others. After all, refusing to stop someone from doing one bad thing by doing another bad thing doesn't make you guilty of the thing they do. Helping someone do a bad thing, though, that is clearly wrong. Now, obviously, I understand that love for one's family is a powerful motivator that does not always prompt one towards good. I also understand that this is a children's story, and such rhetoric is not appropriate. I was just frustrated with the character's helplessness.

I still love the story! I would encourage anyone with kids between 7 and 14 to read Inkheart to them. It is a really fun one to read aloud, after all, and fosters that sense of wonder about books. I would love to hear from anyone who has read this story themselves, too!
Reactions:
Labels: fairy tale fantasy magic