I...To What Purpose? A Brief Reflection on The Long Earth 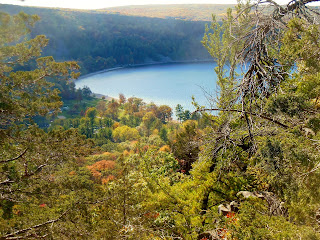 Today I finished reading The Long Earth, a science-fiction novel coauthored by Terry Pratchett and Stephen Baxter. In anticipation of enjoying the book, I also brought the second and third books home from the library at the same time. While I may still read them, I was disappointed in the first.

In The Long Earth, multiple dimensions, each with their own Earth (referred to collectively as "Long Earth"), become suddenly accessible to nearly everyone. These other dimensions are not variations of history, so much as of evolution. No humans exist on any of them. All that is needed to travel between them is a simple device called a "Stepper" or, in the case of "natural steppers" like the main character Joshua, nothing more than an effort of will. People can travel "East" or "West" to Earths on either side of ours. Certain limitations exist, like you can only bring along whatever you carry and no iron can cross at all.

Datum Earth (the original) is highly impacted by the sudden abundance of resources coming in ("gold isn't worth its wight in gold any more" 35) and sudden exodus of a fifth of its population heading out. Conflicts arise as people who were prosperous have the economy pulled out from under them, governments lose power, and anyone can appear in a locked room, steal, kill, or destroy, and then disappear again. Police Officer Monica Jansson certainly has an interesting time dealing with these problems and anticipating others. Helen Green, the daughter of a family leaving Datum to start a settlement 101,754 Earths away, writes in her diary about the journey and the difficulty of leaving behind her brother Rod, who cannot "step" even with a Stepper and was, therefore, trapped at home and abandoned.

The premise of the book is fascinating, but unfortunately, the story follows Joshua Valienté as he travels the nearly empty worlds with sentient human/computer Lobsang. They are traveling deeper than anyone else to discover things of possible profit to humanity, but, most of the time, even the characters are bored. They sit, passing millions of Earths in an airship and occasionally sending out probes.

The greatest conflict is the questions about the purpose of the human race--questions ultimately left unanswered. The characters refer to God, fate, or some outside force as having acted upon them in the revelation of these multiple Earths, and they discuss why--what reason should they have this ability. They discuss whether or not they "deserve" this sudden blessing in space and resources when humanity has squandered the first Earth they were given. But then characters talk about all of these ecosystems driven by evolution and refer to themselves as atheists who should not believe in either supernatural power or a greater purpose. There are nuns and Buddhists, but no one prays. A mythology underlies the process of stepping, but it is shrouded in "science."

The theme also waffles between the American dream of exploration and colonization--small communities working together for great prosperity with minimal interference from the government--and an accusatory environmental perspective. Are humans destructive of worlds, or is the desire to change the earth admirable? Is profit bad while prosperity is good? Is spending time with other people sub-optimal or does it provide a vital sense of community? These questions identify different ideas about humanity's responsibilities and purpose, but make no attempt to guide the reader towards a conclusion.

The story dragged. Its most interesting parts took place closer to home, where the conflict occurred, not out in the boonies with Joshua. The theme was jumbled and read like a freshman's research paper, explaining each possible position without taking a stance or forming an argument. The world the authors built serves as a platform from which they ask no new questions nor present new perspectives from which to answer them.